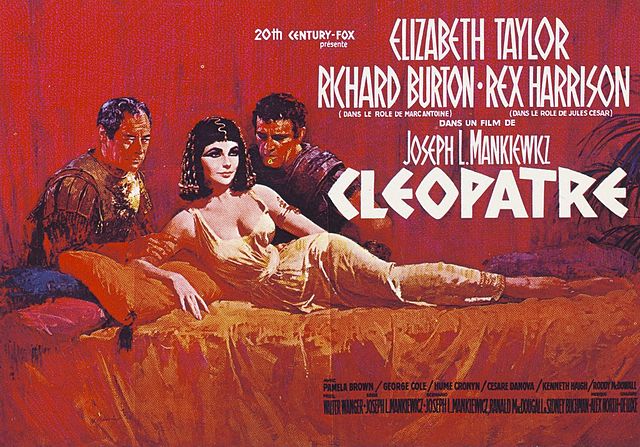 I didn’t watch many films this Christmas – just a handful of Hammer horrors that turned up in BBC2’s graveyard slot and the DVD of Despicable Me 2, which my nephew had on heavy rotation throughout the festivities. Then there was a repeat of the BBC4 documentary, Cleopatra: The Film That Changed Hollywood, which was made back in 2001 and shown earlier in the year. I was going to give it a miss, as I thought I’d already heard enough about the ill-fated 1963 production of Cleopatra; I’m glad I changed my mind.

Like Michael Cimino’s Heavens Gate 17 years later, Cleopatra is one of those movies that is notorious for being a disaster in the making. From its budgetary excesses (the final bill in 1963 was US$44 million), to its protracted running time (the New York premiere version was 243 minutes), everything about this epic 20th Century-Fox production screamed excess.

Then there was the film’s star, the pulchritudinous Elizabeth Taylor, whose million-dollar salary, revolving cast of husbands, and various ailments would provide enough juicy material for several documentaries. As Cleopatra: The Film That Changed Hollywood explains, Taylor’s contract stipulations were behind the questionable decision to begin shooting in damp, autumnal England in 1960. Our decidedly non-Mediterranean weather caused a deterioration in Taylor’s health and the condition of the sets at Pinewood Studios. After eking out a few minutes of usable footage, the production was shut down.

One year, a few hospitalisations, and several million dollars later, Taylor made the choice of a new director – Joseph L Mankiewicz – who took over from Rouben Mamoulian when the project moved to the warmer climes of Rome’s Cinecittà Studios. With producer Walter Wanger in her corner and co-star Richard Burton totally smitten, Elizabeth Taylor wielded a degree of influence that few female stars can match 50 years later.

I’d forgotten how much more thrilling crowd scenes were in “old-fashioned” epics, when those teeming hordes were still real people rather than virtual images conjured up by overpaid, overpixellated geeks. According to this documentary, veteran cinematographer Leon Shamroy threw a wobbly over the light conditions for the awe-inspiring entrance into Rome sequence and insisted they wait several months to reshoot. (Let’s cut Leon some slack here: he had already won three Oscars and would pick up a fourth for Cleopatra.)

Of course, all those actors and extras had to be clothed (some of them rather scantily), which meant that Cleopatra required 26,000 costumes. You’d be forgiven for thinking that Taylor’s costume changes alone ran into the thousands, but Oscar-winning Irene Sharaff and her collaborators only produced 65 outfits for the glamourpuss Queen of the Nile.

It’s been many years since I last watched Cleopatra in its entirety – it’s certainly not my favourite Elizabeth Taylor film. But I’d happily sit through the two-hour Cleopatra: The Film That Changed Hollywood again, just to remind myself how much more epic Hollywood cinema was before it was swamped by the CGI revolution.

© Susannah Straughan and The Taft Hotel, 2013–19. Unauthorized use and/or duplication of this material without express and written permission from this blog’s author and/or owner is strictly prohibited. Excerpts and links may be used, provided that full and clear credit is given to Susannah Straughan and The Taft Hotel with appropriate and specific direction to the original content.